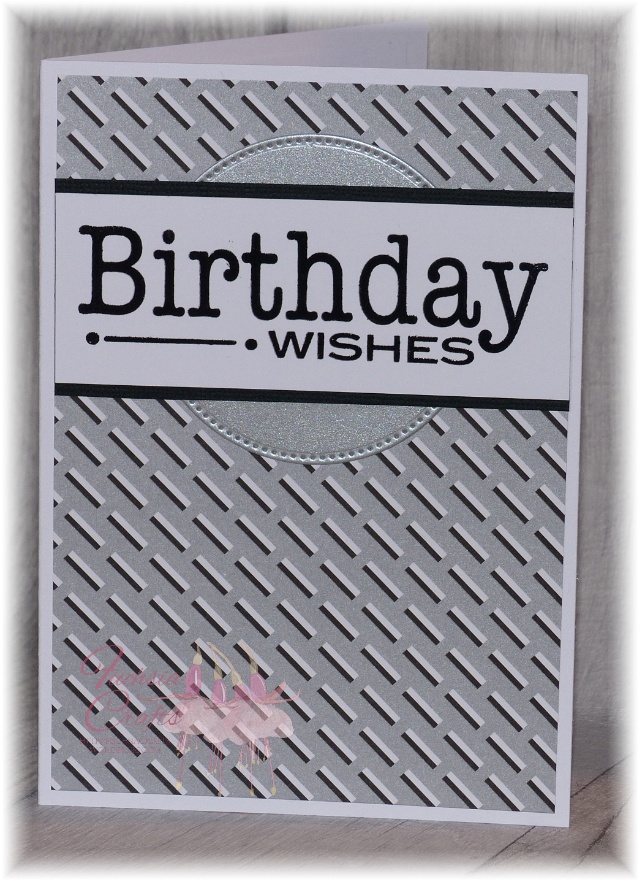 I always think masculine cards should be simple – no fuss & definitely no frills! So the sketch at Case This Sketch this week appealed to me and I took the opportunity to use up some of my (huge!) stash of patterned paper in the process. The greeting is by Woodware, I stamped it with Versafine Onyx Black and embossed it with clear embossing powder. I then spent ages trying to work out what to do for the curved shape but settled, in the end, on a simple circle shape using a die by Swedish House Crafts. 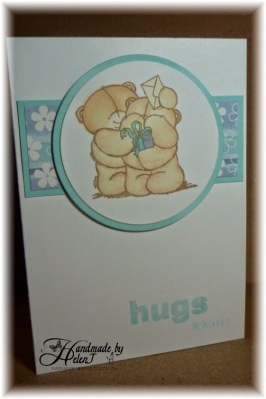 The latest challenge over at Addicted to CAS is Hugs & Kisses; I liked the new sketch over at Tuesday Morning Sketches so I decided to play along there for the first time. The only image stamp I had which fitted the hugs part of the challenge was this old Forever Friends one. 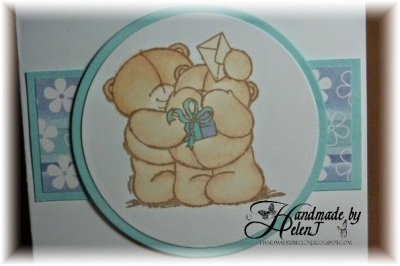 I stamped the image in Memento Toffee Crunch onto Limetree Crafts card, then dug out my Promarkers for the first time in a while. I used Oatmeal, Vanilla & Ivory for the fur, Sand Dune for the noses & envelope, Oasis & Cornflower for the gift. The sentiment, by Francoise Read for Woodware, was stamped in Hero Arts Pastel Blue Shadow Ink. The backing paper was a Forever Friends one from my stash. 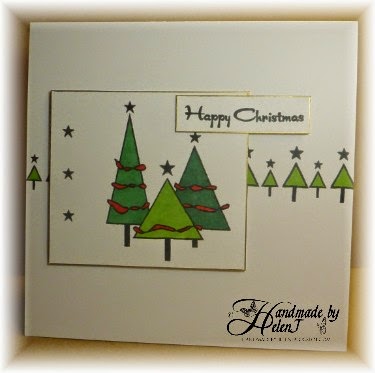 The challenge over at Less is More this week is “More Than One Tree”; I didn’t count how many are on here but there’s definitely more than one! The starting point for this card was the sketch over at Addicted to CAS and a very old set of stamps by Woodware, coloured with Promarkers. The finished result looked a bit flat & boring so I added a touch of Wink of Stella to the red and the stars, which you can just about see in the photo below. The card was still flat & boring so I finished off with a gold edge to the image & greeting, which were both popped up on foam squares. 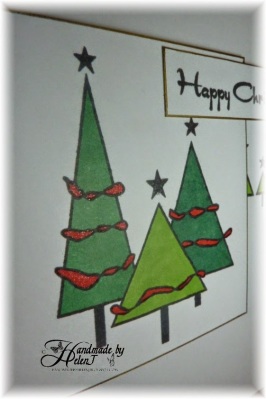 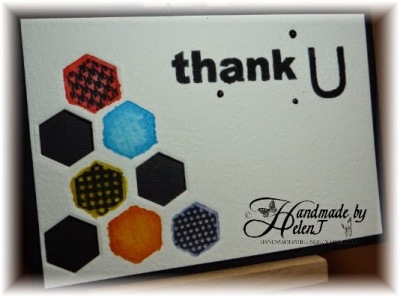 Another week, another challenge, this time the one over at Addicted to CAS where the theme is geometric. This was an ideal opportunity to try out a recent Ebay purchase of some Clearly Besotted stamps & dies, and another watercolour technique. This time the technique is to emboss with the dies rather than cutting the card, and to let watercolour paint fill the embossed lines.

I decided to cut out one or two of the shapes to let the black background show through, and stamped some of them with a variety of the stamps from the set. The greeting is by Woodware, and the enamel dots were created with Ranger Enamel Accents. 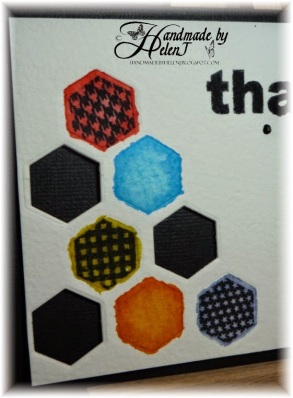 This card is for a very special young man called Owen, who loves music and is the life and soul of any party he goes to – he loves celebrating birthdays, even if it’s not his own! 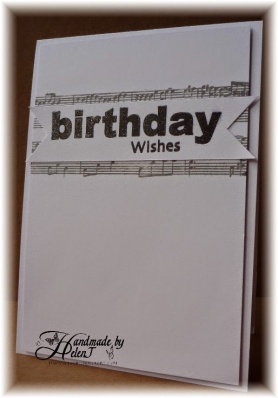 I’m entering this into the challenge over at Simon Says Stamp, where the challenge is “Make it Sparkle”. Although this card doesn’t look sparkly, I painted the large birthday letters with clear Wink of Stella as I hope you can see in this close-up – 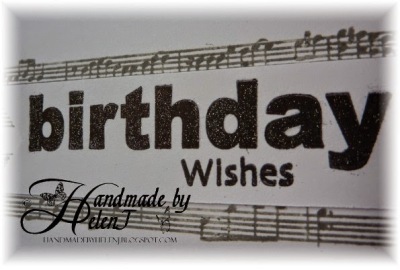 I’m taking part in an online watercolour class at the moment, and one of the techniques on day 1 was using stencils with watercolours. This was my second attempt and it ended up looking more grungy than I intended, but as I needed to make a card for a teenage boy that was a happy accident! I had intended the finished card to be a little more CAS than it is, but a not-so-happy accident was getting some stray black ink where I didn’t want it, so I had to cover that up with grunge stamps. 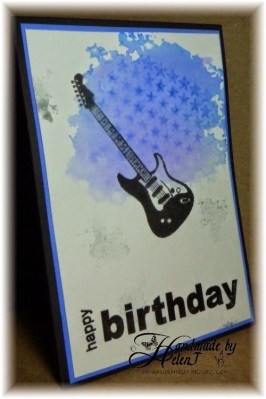 My first attempt had turned out too pale, so this time I dug out my Whispers brush markers which I haven’t used for a couple of years as it belatedly occurred to me that they could be used for watercolouring, and they worked really well. 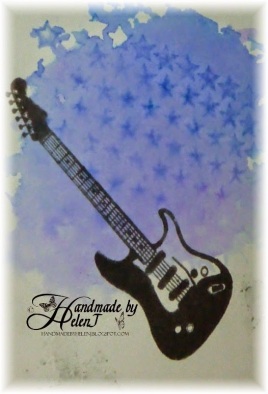 The last of the Christmas cards; the first was to my Mum from my son using stamps from and a liberal sprinkling of Wink of Stella (again): 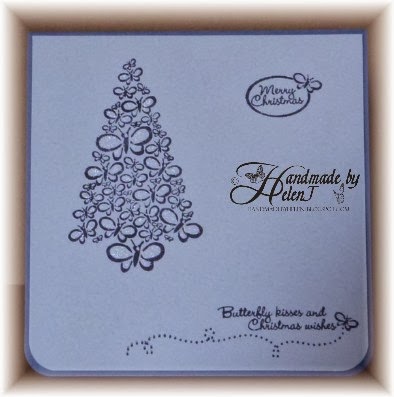 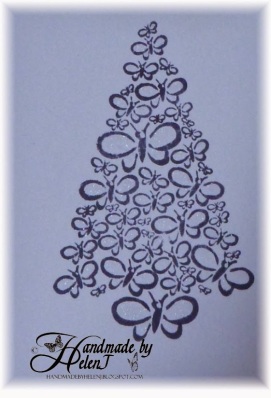 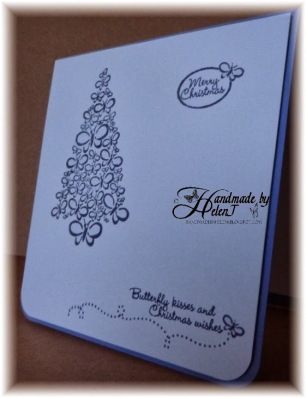 Cardstock: Bazzill Basics, Xerox Colotech Plus
Ink: Adirondack Eggplant
Stamps: Kirsty Wiseman for Personal Impressions
The second card is from my son to my other half, and was entirely made from digital downloads, the image being coloured with Promarkers: 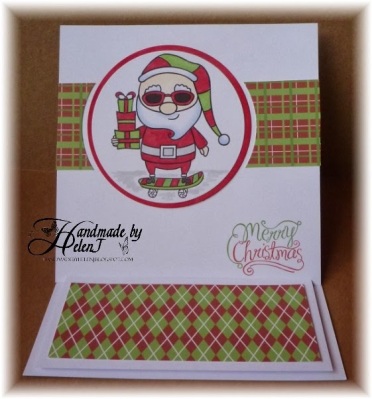 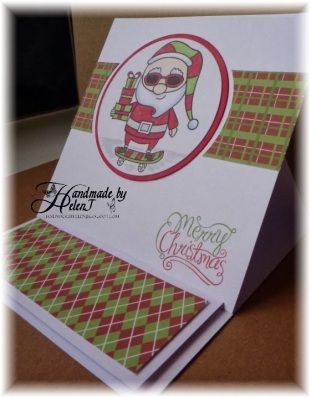 Cardstock: Xerox Colotech Plus
Santa Image: Cool Santa on Skateboard from Pink Cat Studios
Backing papers: MyGrafico
Greeting: free (not sure where from)
And last, but not least, this is the card I sent to our 2 nephews, neither of whom had a particularly good end to 2013 so I hope 2014 is better for them both! 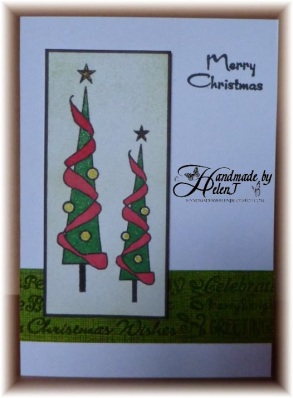 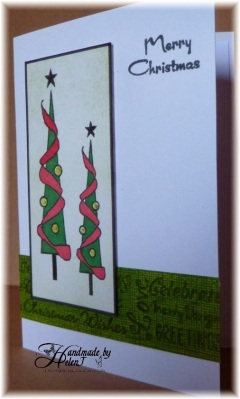 Cards for my nephews’ birthdays all tend to revolve around cricket, and this one is no exception. I don’t have very many cricket stamps, though, so I decided it was time I became more inventive with the ones I have got. 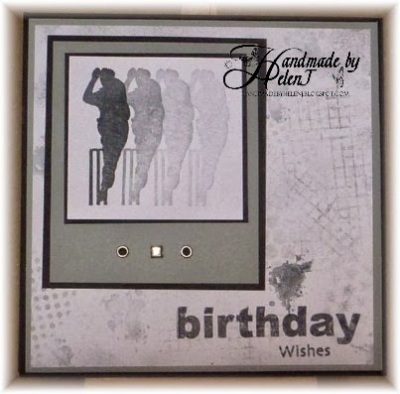 The main image was a test of my new Woodware stamp positioner to stamp 4 times without re-inking the stamp in between, therefore using the second, third & fourth generation ink. 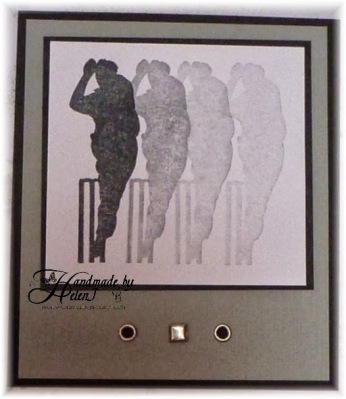 The background was created using a mix of background stamps & masks with several generations of ink. It turned out more grungy than I’d intended but I was still quite happy with it. 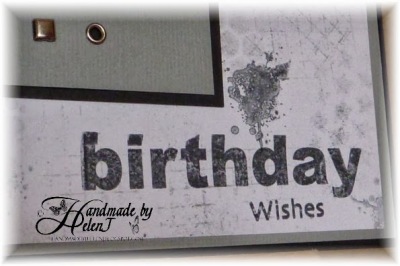 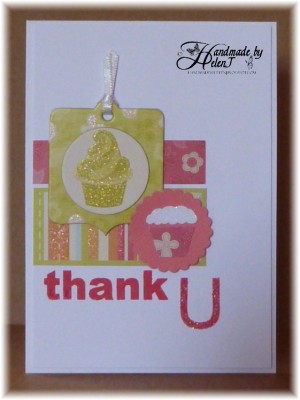 I’m well out of my comfort zone today! I saw this sketch and decided I’d play along, using up some of the crafty stash I’ve been hoarding for ages. 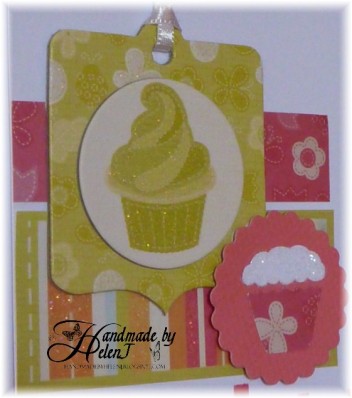 The papers & green cupcake tag are by WRMK. I used an EK Success punch to make another cupcake out of matching paper & plain white card (covered in Glamour Dust) then mounted it on some of the matching cardstock. 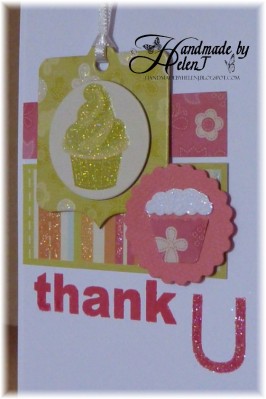 The greeting is by Woodware, stamped in Memento Love Letter, with a bit of bling provided by Crystal Glamour Dust.

I’ve been suffering from a severe lack of mojo just lately!  Less than 2 weeks to Christmas Day & I still wasn’t inspired to make any cards.  These days I only make a few for close family, life really is too short to make handmade cards for everyone on our list.  Last night I decided it was time I gave myself a kick up the backside & just got on with it, and this is the first I completed although I now have a few others almost done.  I also decided that, given the fact that my mojo has deserted me, I would keep it simple although I think this one is maybe a bit TOO simple – what do you think? 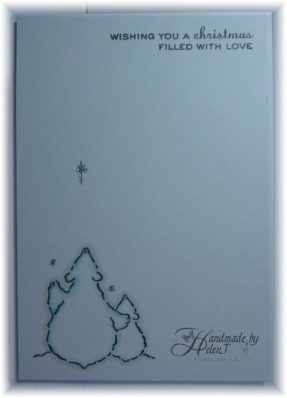 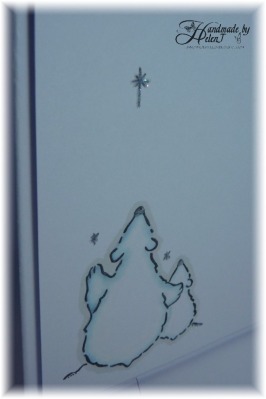 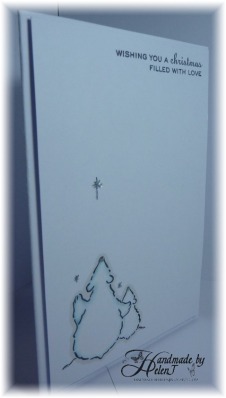 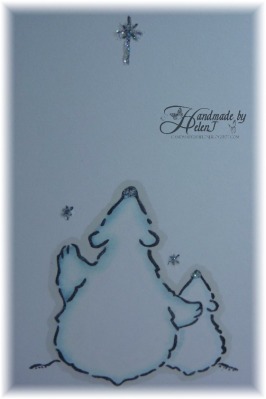